One of the major innovations in the crypto-space is the smart contract. In 1996 Nick Szabo wrote: “a smart contract is a set of promises, specified in digital form, including protocols within which the parties perform on these promises.” 1)Nick Szabo, “Smart Contracts: Building Blocks for Digital Markets,” 1996, http://www.fon.hum.uva.nl/rob/Courses/InformationInSpeech/CDROM/Literature/LOTwinterschool2006/szabo.best.vwh.net/smart_contracts_2.html

A primitive ancestor of a smart contract is a vending machine. It works by detecting the insertion of a quarter and then executes a sale. Smart contracts take this principle to the next level. They can handle complex transfers of property as long as they are controlled by a digital means.

With the transfer of property, there are legal implications. How do smart contracts relate to the legal world? For that, we must take a step back and understand what a contract is.

What is a Contract?

According to Burnham and Kraynak (2012) “A contract is simply a promise or set of promises enforceable by law.” 2) Scott J. Burnham and Joe Kraynak, “Contract Law For Dummies,” (John Wiley & Sons, New Jersey, 2012): Part 1, Chapter 1 Based on this definition, two other questions arise; what law is being enforced and what makes promises enforceable?

The same authors write that in the United States “Contract law is nuanced and fact intensive. A ‘rule’ may differ, for example, depending on whether the parties are two giant corporations having their lawyers negotiate an agreement or family members making an agreement over the dinner table.” 3)Burnham and Kraynak (2012): Part 1, Chapter 1

We can conclude that the type of contract determines which laws apply. It is also safe to assume that in different countries, different laws apply.

Furthermore, they write that in order to be enforceable, a contract has to be “a bargained-for exchange that requires the following three ingredients:

There are other requirements however for a contract to be valid. These include the contracting parties should being of legal age, the accordance of its agreed-upon matter with consumer protection statutes or whether legalities or fairness come into question.5)Burnham and Kraynak (2012): Part 1, Chapter 2

The question is: How do smart contracts relate to contract law? Contemplating this issue in 2008, Nick Szabo made the distinction between “wet code,” interpreted by the brain, and “dry code,” interpreted by computers.6) Nick Szabo, “Wet code and dry,” (Unenumerated, August 24, 2008), accessed April 15, 2018, https://unenumerated.blogspot.de/2006/11/wet-code-and-dry.html The law uses wet code while smart contracts use dry code. To sum it up:

Are the Languages Compatible?

Real world projects often end up very different from what was agreed upon to begin with, as explained in this example:

An entrepreneur hires a programmer to build a website in six weeks. In the first week, the programmer finishes his milestone. The second week, he falls sick and is unable to reach his milestone set for that week. In the third week, he manages to finish his backlog of work as well as his milestone for week three. The fourth week, he fails to meet his target due to a lack of feedback from the entrepreneur. In the fifth week, although the programmer intents to work, a nearby falling tree disrupts his Internet connection. The entrepreneur has had enough. He wants to terminate the arrangement and doesn’t want to pay. The programmer however wants at least half of the agreed upon money for work already performed.

Human language and legal systems are well adjusted to these subtleties. A judge or an arbitration court could come up with a fair and binding ruling. However, creating computer code beforehand prepared for all such variables is impossible. And this is a simple project…

In addition, contracts can be vague, contain mistakes or incorrectly reflect the intention of one or both of the contracting parties. It is naive to think that this is an aspect of Wet Code and that Dry Code doesn’t have this problem. It is still, after all, written (and signed) by humans.

Putting the “Smart” in Smart Contracts

To address these issues, ideas are proposed for future smart contracts to interact with the world. They could for example make use of a live-data feed of the weather to pay out crop insurance7)Vitalik Buterin, “A Next-Generation Smart Contract and Decentralized Application Platform,” (2013) accessed April 4, 2018, https://github.com/ethereum/wiki/wiki/White-Paper:
“Crop insurance. One can easily make a financial derivatives contract but using a data feed of the weather instead of any price index.” or use prediction markets to discover an objective truth.8)Robin Hanson, “Shall We Vote on Values, But Bet on Beliefs?,” (George Mason University, 2013), https://mason.gmu.edu/~rhanson/futarchy2013.pdf:
“According to most experts in economics and finance, speculative markets are exemplary info institutions. That is, active speculative markets do very well at inducing people to acquire info, share it via trades, and collect that info into consensus prices that persuade wider audiences.”

But is fully relying on data wise? According to the Gerontology Research Group, only 35 individuals are known to have lived to the age of 112. Yet, the Social Security Administration of the United States has about 6.5 million people aged 112 in their database.9)Patrick P. O’Carroll, Jr., “Numberholders Age 112 or Older Who Did Not Have a Death Entry on the Numident,” (Office of the Inspector General, Social Security Administration, A-06-14-34030, March 2015), accessed on April 17, 2018, https://oig.ssa.gov/sites/default/files/audit/full/pdf/A-06-14-34030_0.pdf Their deaths have simply never been registered! This could have significant consequences for life insurance smart contracts relying on “official” numbers.

Not the Entire Story

Moreover, numbers alone might not tell the entire story. Let’s take the example of crop insurance mentioned earlier. Before a storm, an insured farmer might deliberately leave his crops in the fields, as he may prefer a payout after the storm hits. Or he manages to harvest half of his crops in time and what is left has significant value as pig-fodder. Subtleties like these cannot be coded in a smart contract beforehand.

In addition, smart contracts create a decentralized irrevocable commitment. But what if this agreement is ruled to be unlawful? For example, what if someone acting outside of his authority created it?

On a critical note, the crypto-community seems to have some urgency to replace real world human interaction with predictable computer codes. But unlike computer codes, human action does not result in simple binary outcomes.

It could therefore be argued that the main use of smart contracts is to automate specific (simple) aspects of a transaction, instead of trying to govern human behavior or complex projects. In this light, smart contracts would firstly be a technological development that merely facilitates the legal transfer of property.

Having said that, the predictability, transparency and measured outcomes of smart contracts offer a tremendous opportunity for real world applications. And there is a framework that allows the use of smart contracts in a lawful manner.

In order for smart contracts to have any force in the real world, they need to be wrapped in a wet code framework. This can be made clear with a simple example:

A seller sells goods to a buyer. Think about the “Amazon Model,” the shipping of the product to the buyer by courier. The buyer pays into a smart contract. The smart contract independently verifies the sale of the product and releases the funds if all conditions of the sale are met. When either the independent verification takes place, or the buyer approves the transaction, the payment is released. If the payment isn’t released within one month, the payment is returned. : 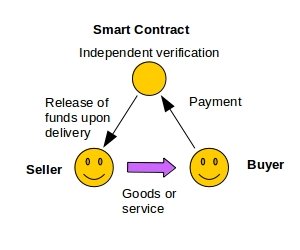 The independent verification could either be carried out manually by a third-party, or fully automatically. In this case, a smart contract tracks the delivery online with data feed from the courier. Upon delivery, the funds are released.

Even though the vast majority of transactions go smoothly, even such a simple transaction could lead to a dispute. The package could be delivered to the wrong person or arrive damaged by rain. Only at this point that the human language contract becomes important.

There are existing ideas on merging smart contracts with legal documents. They mostly look at it however from a technical angle or focus on a specific type of contract.12)Ian Grigg, “The Ricardian Contract,” (Systemics, Inc., 2004), accessed August 12, 2018, http://iang.org/papers/ricardian_contract.html

A simple and way to create a bond between a legal contract and a smart contract is often overlooked; at the start of a human language contract―in the clause identifying the parties―a hash or link could be included corresponding with the appropriate smart contract.

To simplify the human language contract, an additional step could also be included. To deal with transactions such as mentioned in the example, terms and conditions are required. Major shipping companies such as Ebay and Amazon have developed tried and tested examples.

Such existing terms and conditions can act as a legal framework for the human language contract, which in turn is linked to a smart contract. This could be called a Smart Contract Block. 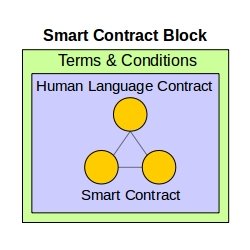 This way we create very simple contracts with a limited amount of variables. The bulk of the clauses governing the smart contract Block can be found in the terms and conditions.

Another main benefit of this approach is standardization. Smart Contract Blocks could become reliable after being used and tested over time. With them, users can simply pick the Block most suitable for their transaction and fill in the details relevant for their transactions―like selecting an App in the Appstore!

Widely used Blocks that contain a proven enforcement framework could become valuable assets when licensed by their creators. At the same time, they are likely much cheaper to use than uniquely drafted contracts.