Other innovations can be found in decentralized companies and other forms of organizing human cooperation. A first example would be the decentralized corporation. A second example is the Decentralized Autonomous Organization (DAO).

In order to understand what a decentralized corporation is we must first ask: what is a corporation?

A few characteristics make the “corporation” unique. First of all, it is the creation of a fictional legal person, separate from its owners, that potentially exists in perpetuity. A corporation has the right to own property, hire people, take on loans and engage in contracts. It can sue and be sued. A second important aspect of a corporation is that it limits the liability of the owners. It is thus a great way for investors to invest capital without risking bankruptcy and without the need to be part of day-to-day management. This division of roles and responsibilities is another important characteristic of corporations.1) Marie-Laure Djelic, “When Limited Liability was (Still) an Issue: Mobilization and Politics of Signification in 19th-Century England,” (Sage Journals, Vol 34, Issue 5-6, 2013), http://journals.sagepub.com/doi/abs/10.1177/0170840613479223?journalCode=ossa: page 2

Origins of the Corporation

The corporation as we understand it today originated in 19th century England. Robert Lowe, a Liberal MP, spoke at the House of Commons in favor of limited liability. His words reveal the Classical Liberal desire to do business without restrictions also common in the crypto-space:

“My object at present is not to urge the adoption of limited liability. I am arguing in favour of human liberty – that people may be permitted to deal how and with whom they choose without the officious interference of the state… in my judgment, the principle we should adopt is this – not to throw the slightest obstacle in the way of limited companies being formed – because the effect of that would be to arrest ninety-nine good schemes in order that the bad hundredth might be prevented. (House of Commons, 1856, pp. 130–1)”

The Legal Framework of the Corporation

One statement that can be heard in the crypto-community is that a corporation is nothing but a set of contracts.2)Vitalik Buterin, “Bootstrapping A Decentralized Autonomous Corporation: Part I,” (Bitcoin Magazine, 2013,) accessed April 11, 2018,
https://bitcoinmagazine.com/articles/bootstrapping-a-decentralized-autonomous-corporation-part-i-1379644274/
“When a corporation has limited liability, it means that specific people have been granted extra privileges to act with reduced fear of legal prosecution by the government – a group of people with more rights than ordinary people acting alone, but ultimately people nonetheless. In any case, it’s nothing more than people and contracts all the way down.” Therefore, a set of contracts is all that is needed to create a corporation.

The reality is that a corporation needs to be recognized as one, and this is where the legal framework becomes important. And to get an idea of what is needed in a legal framework, we can look at the English (UK) companies law.3)“Companies Act 2006, Chapter 46,” http://www.legislation.gov.uk/ukpga/2006/46/pdfs/ukpga_20060046_en.pdf

The following are examples of requirements for the establishment of a corporation:

A registered office and a company registrar are physical locations. Although laws vary, the requirement of registration at a physical location appears to be universal.4)“All company registers,” (OpenCorporate, The Open Database Of The Corporate World), accessed April 11, https://opencorporates.com/registers?all_registers=true In addition, for a UK court to recognize a foreign corporation, registration in a recognized State is required.5)“UK Foreign Corporations Act, 1991,” http://www.legislation.gov.uk/ukpga/1991/44/section/1

What is needed, is some sort of Nexus.

As we saw, amongst the essentials for a corporation to be recognized is its registration at a company registrar. It has to be noted that in jurisdictions such as Delaware and the UK, the procedure of registering a corporation in their respective company registrars is almost completely digitalized. This in mind, a more decentralized solution is only a small and realistic step forward.

One could argue that blockchains are perfect for establishing a company register. Companies could be registered on the blockchain under a clear and understandable set of company regulations, similar to those companies are governed by in the British Virgin Islands.

A unique company number, a certificate of incorporation and company documents could be issued automatically and remain verifiable on the blockchain. This last feature also could prevent translation and expensive legalization issues that corporate documents currently have when used across borders.

The requirement of having a physical location could also be met, be it with a little detour.

International tax laws dictate that one obtains a “Permanent Establishment” (PE) based on the activities or management of a company. And this works both ways. If countries obtain taxing rights, it is only logical to conclude that companies then also obtain registration rights. In this light, a decentralized corporation could be considered registered at the place of effective management.

A second option could be for countries to provide “landing zones” for decentralized corporations; a so-called Nexus. A similar process of incorporation would apply, but now a country of registration and registered office is clearly assigned. Countries could establish free zones, like those successful in Dubai, specifically for registering such companies. 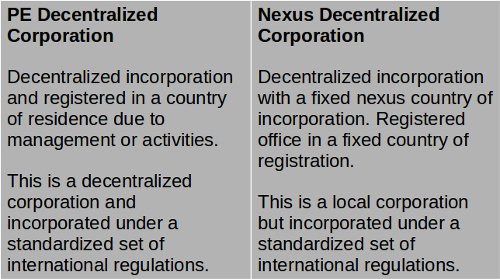 Over time, a global standard and one set of universal company regulations could establish a type of corporation that is the same everywhere. It would make the process of setting up a legal entity uniform, simple, transparent, quick and cheap―just as the people who einvented limited liability intended it to be.

A note has to be made on privacy: some company registries display a lot of information publicly. Due to the public nature of the blockchain and increasing concerns for privacy, as little information as possible should be included in blockchains. As a solution, a hash, or encrypted version of the relevant incorporation data could be visible on the blockchain with its key only provided to relevant parties. Having said that, registration countries will likely enforce their KYC requirements.

The Decentralized Autonomous Organization (DAO) is very different. In fact, there is a lot of discussion on what a DAO is. Allan & Overy (2016) provide a good summary:

“A Decentralized Autonomous Organization (DAO) is a computer program, running on a peer-to-peer network, incorporating governance and decision-making rules. DAOs can be programmed to operate autonomously, without human involvement, or the code can provide for direct, real-time control of the DAO and funds controlled by it. The earliest DAOs are software controlled community organization experiments which seek to re-implement certain aspects of traditional corporate governance, replacing voluntary compliance with a corporation’s charter with actual compliance with pre-agreed computer code.” 6)Allen & Overy, “Decentralized Autonomous Organizations,” (Allen & Overy LLP 2016), http://www.allenovery.com/SiteCollectionDocuments/Article%20Decentralized%20Autonomous%20Organizations.pdf

When we look at this from a legal perspective, it is clear that a DAO is neither a corporation, nor any other type of existing legal personality. It doesn’t have a registered office and has no physical place of business or registration. There are no shareholders or managers.

As a result, it cannot perform many of the tasks commonly attributed to it, like owning property or engaging in contracts.

Without the veal of corporate protection, participants in a DAO should take precautions if they want to be shielded from liability or taxes.

Limited Liability and a DAO

As mentioned earlier, a DAO is not a legal entity. However, some important notes have to be made on this new form of collaboration.

Cryptography has created an impenetrable layer “around” crypto-currency networks. The result is that what happens within these networks is protected from outside influences by a cryptographic “Circle of Protection.” This is demonstrated by the following figure: 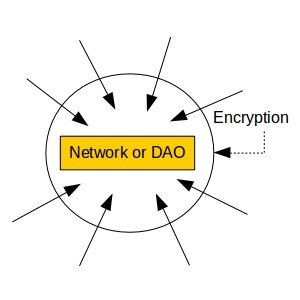 This means that use of these networks, including DAO’s, cannot be restricted. Regulation can therefore only focus on the participants (black arrows) of the network. For example, users can be held liable for whatever happens within a DAO or fully taxable on its proceeds.

In certain cases, users would be wise to use a “layer of protection” when accessing the network when limited liability or taxation are a concern. Such a layer could be established by the previously mentioned decentralized corporation, or the corporate veil of an existing legal structure.

Now that we learned the possibilities and shortcomings of both the legal system and the main decentralized legal applications, it is time to define Decentralized Law. This is done in the next lesson.