In the previous two lessons we learned that both governments and multinational institutions create most laws. Where does this leave the individual? Unfortunately, he has little say in the matter. But as this article demonstrates, private individuals do have law creating powers.

For now, the influence of each of the four sources of law looks like this: 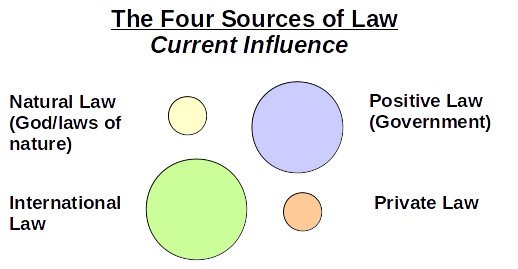 Above, you see the current situation. Private law and natural law (such as human rights laws) are increasingly less influential as compared to government enforced top-down laws.

This websites introduces a road-map for increasing the power of private laws. It aims to return power to the individual―allowing him more freedom to structure his life as he sees fit. In the future, hopefully, the influence of the different sources of law is more balanced; with the largest role for private decentralized law of course… 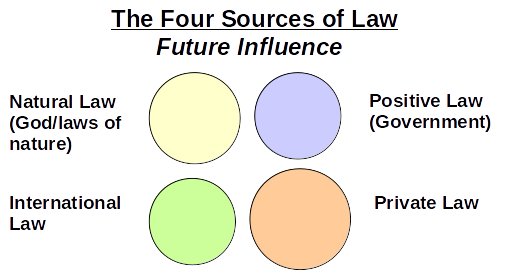 How can private parties create law?

The Romans first created the distinction between Public Law – governing the relationship between individuals and the State – and Private Law – governing relationships between individuals. 1)Feldbrugge, F.J.M., “Private Law and Public Law,” (Koninklijke Brill NV, Leiden, 2009), page 1:
“The earliest solution was offered by the Roman jurist Ulpian who stated: ‘Public law is what regards the welfare of the Roman state, private law what regards the interests of individual persons; because some things are of public, others of private utility.’
D.I.1.2. Publicum ius est, quod ad statum rei romanae spectat, privatum quod ad singulorum utilitatem; sunt enim quaedam publice utilia, quaedam privatim. The passage was included in the introductory chapter of Justinian’s Institutions, which may explain why it was so well known.”

The 2006 edition of the Oxford Dictionary of Law defines private law as follows:

“The part of the law that deals with such aspects of relationships between individuals that are of no direct concern to the state. It includes the law of property and trust, family law, the law of contract, mercantile law and the law of tort.” 2) Martin, E., editor, The Oxford Dictionary of Law (Oxford: Oxford University Press, 2006), page 411:

As is made clear, there is a variety of areas where private individuals and organizations create their own laws to govern their actions. Here are three examples:

Independently of government policies, private groups have come up with inovative ways of licensing creative work in a more flexible way. Examples are Creative Commons licenses, and the wide variety of open source licenses that are also popular in the crypto-space. 3) Examples are provided on this page: https://opensource.org/licenses

The exact definition of Lex Mercatoria is debated, but it refers to a system of law developed during the Middle Ages that successfully governed international trading. Rather than a law belonging to one country, it could be considered as a general law of nations.4) Robert Allen, “Lex Mercatoria,” World Encyclopedia of Law, accessed April 10, 2018, http://lawin.org/lex-mercatoria/ [Link broken – Dec 2019]

Currently, Lex Mercatoria doesn’t provide a codified framework that is accessible, clear or has established jurisprudence. Therefore, many practitioners refrain from using it as governing law.5) Margaret J. Moses, “The Principles and Practice of International Commercial Arbitration,” 3rd Edition, (Cambridge University Press, London, 2017): Chapter 4C, The Lex Mercatoria However, such a framework could be developed. In fact, work on the unification of private law into comprehensible legislation is being done, for example by UNIDROIT.6) “History and Overview,” (UNIDROIT), accessed May 12, 2018, https://www.unidroit.org/about-unidroit/overview
“The International Institute for the Unification of Private Law (UNIDROIT) is an independent intergovernmental Organisation with its seat in the Villa Aldobrandini in Rome. Its purpose is to study needs and methods for modernising, harmonising and co-ordinating private and in particular commercial law as between States and groups of States and to formulate uniform law instruments, principles and rules to achieve those objectives.”

Globally operating international organizations such as the FIFA (Football) and the IOC (Olympic Games) hold significant power over participating countries and their athletes. They govern the activities of millions of participants and billions of spectators. They establish the rules of the games and even have their own court system.7)“Court of Arbitration for Sport,” (FIFA), accessed December 16, 2019, https://www.fifa.com/about-fifa/who-we-are/legal/court-of-arbitration-for-sport/
“According to article 57 of the FIFA Statutes, FIFA recognises the independent Court of Arbitration for Sport (CAS) with headquarters in Lausanne (Switzerland) to resolve disputes between FIFA, member associations, confederations, leagues, clubs, players, officials, intermediaries and licensed match agents.”

Besides these broad forms of widely followed laws, there is a more exclusive form of private law: law by contract. When two or more people of sound mind sign a contract, it binds them to whatever they agreed upon. Contracts can hold significant power in someone’s life―think mortgages or marriage agreements.

Private law by contract will be the first essential building block for the early stages of Decentralized Law. The main reasons being that there is a wide variety of freedom to engage in contracts, they offer flexibility in determining the governing laws, and they are enforceable around the world.

…But what if something goes wrong?

Suing a contracting party in a traditional court system can be problematic; it is often a lengthy process and language, lack of knowledge or neutrality may be an issue. What’s worse is that a ruling in one country is often not directly enforceable in another due to differences in legal systems.8) Yuliya Zeynalov, “The Law on Recognition and Enforcement of Foreign Judgments: Is It Broken and How Do We Fix It?,” (Berkeley Journal of International Law, Volume 31, Issue 1, 2013), accessed April 6, 2018, https://scholarship.law.berkeley.edu/cgi/viewcontent.cgi?article=1435&context=bjil: page 152.
“this study concludes that the absence of an international enforceability regime for foreign judgments leaves a void in the realm of private International Law that sits in stark contrast to the well-established mechanism for enforcing foreign arbitral awards.” The concept of international arbitration was thus developed to tackle this issue.

Arbitration is a private court system for resolving disputes. Parties who arbitrate have decided to resolve their disputes outside any traditional judicial system. In most instances, arbitration delivers a final and binding decision, producing an award that is enforceable in a national court.

An arbitration agreement creates a unique body of private law. Those involved consent to be subjected to this body of law by signing the agreement. They can choose those who rules on any dispute, and they can even choose their own governing laws.9) Margaret J. Moses, “The Principles and Practice of International Commercial Arbitration,” 3rd Edition, (Cambridge University Press, London, 2017): Selection of characteristics from Chapter 1

It is thanks to the New York Convention (1958) that arbitration awards are enforceable in almost any country in the world. During the convention, it was agreed that arbitration cases decided in the correct form in one of the contracting States are directly enforceable in other States without the need for a local court case.10)“Convention on the Recognition and Enforcement of Foreign Arbitral Awards,” United Nations, (New York, 1958), accessed April 6, 2018, https://treaties.un.org/doc/Treaties/1959/06/19590607%2009-35%20PM/Ch_XXII_01p.pdf At present, 161 countries are part of the New York Convention.11) “Contracting States – List of Contracting States,” New York Arbitration Convention, accessed on December 16, 2019, http://www.newyorkconvention.org/list+of+contracting+states

Within the framework of international arbitration, contracting parties are completely free to create their own private systems of law. If needed, the government in any of the member States enforces the ruling.

There is a lot of freedom to create private law. However, there is one catch; contracts cannot break public law. In general, you cannot sign a contract on matters restricted by the laws of the country where you operate.

For example: a contract governing the sale of a house in exchange for a suitcase of narcotics is not valid and unenforceable in most States around the world.

This might sound logical, but it restricts what can be done by private law. The development of private law is only interesting in areas currently not regulated by governments. This is especially relevant for recent popular projects aiming on creating new countries, jurisdictions, legal entities, or public funding (ICO’s). 12) There are many projects in these areas. Some with a lot of funds and followers. The coming lessons reveal simple solutions for some of these project.

Despite these limitations, there are massive areas to explore such as: international trade, cross-border freelancer work, almost everything related to the decentralized revolution and crypto-currencies, and much more…

There is absolutely no reasons why the decentralized industry should wait for the government to come up with legislation. Private laws can be created right now!

Private law streamlines the interactions of (large) groups of individuals around the world. Moreover, forms of private governing laws already exist, and private court systems are created by contract.

The use of decentralized private law is limited to what isn’t regulated, but this still leaves massive areas open to disruption and innovation.

How this in time can change how the world functions, is explained in the final lessons on this topic…