The future of money is here; will the Federal Reserve Board be authorized to use distributed ledger technology for the creation, distribution and “recordation” of all the transactions of a Digital Dollar?

On July 28, 2021, a new bill was introduced in the US House of Representatives. This bill, sponsored by Congressman Don Beyer,1)“Press Release: Beyer Introduces New Legislation To Regulate Digital Assets,” (United States Congressman Don Beyer, Washington, July 28, 2021), accessed on September 6, 2021, https://beyer.house.gov/news/documentsingle.aspx?DocumentID=5307 aims to regulate crypto-currencies. But it does more…

The bill is called the “Digital Asset Market Structure and Investor Protection Act”2)“H.R.4741 – Digital Asset Market Structure and Investor Protection Act, 117th Congress (2021-2022),” (US Congress, Washington, July 28, 2021),
https://www.congress.gov/bill/117th-congress/house-bill/4741/
[author: there is on September 18, 2021 only one version of the bill]. (“Digital Asset Bill”). And for the majority, it sets out future rules for crypto. However, hidden in this bill, changes to the foundation of the Dollar are proposed.

And because nobody outside crypto (and frankly, few inside crypto) actually read the bill, these amendments have so far largely gone unnoticed.

<Changing the Nature of Money_

Crypto-currencies have been making waves. Fans of crypto think they have the new medium of exchange. However, in the current proposed regulations, Congress clearly takes a strict approach towards crypto and its various use cases. The following article provides an overview of these new US crypto regulations.

<The Dollar and the Federal Reserve_

Instrumental in the creation of the US Dollar is the Federal Reserve. It was set up in 1913 as a reaction to the 1907 financial crisis. During this crisis, Finance mogul J.P. Morgan, who had bailed the government out of a financial crisis in 1895, had to organize private sector investments and lines of credit to stabilize the banking system.

<What The FED Does: Creation of Digital and Physical Dollars_

Contrary to what is widely understood, the Fed does not “print money.” It can only manage the money supply indirectly.4)“What are the tools of U.S. monetary policy?,” (Federal Reserve Bank of San Fransisco, San Fransisco), accessed on September 6, 2021, https://www.frbsf.org/education/teacher-resources/us-monetary-policy-introduction/tools/

It is the private sector that “creates” most of what we use as money in the modern banking system. They do this by issuing credit to the market.

It is with the supply of credit by private banks that the monetary supply is inflated. Conversely, with the reduced demand for credit, the money supply deflates. The FED does not have as much direct influence on this process as it wants the market to believe.

In addition, the FED is responsible for the distribution of Federal Reserve Notes (those little papers we know and use as Dollars). Currency departments at each of the 12 Federal Reserve banks make recommendations about future currency needs. The banks then place orders with the Comptroller of the Currency. After reviewing the requests, the Comptroller forwards them to the Bureau of Engraving and Printing, which then produces the appropriate denominations of currency notes. The Federal Reserve distributes these through its member banks.5)“Distribution of Currency and Coins,” (U.S. Department of the Treasury, Washington, November 13, 2014), accessed on September 18, 2021, https://www.treasury.gov/about/education/Pages/distribution.aspx

To summarize: the Federal Reserve does not directly create digital money. And, it also doesn’t create physical money (notes and coins).

“(d) To supervise and regulate through the Secretary of the Treasury the issue and retirement of Federal Reserve notes (both physical and digital), except for the cancellation and destruction, and accounting with respect to such cancellation and destruction, of notes unfit for circulation, and to prescribe rules and regulations (including appropriate technology) under which such notes may be delivered by the Secretary of the Treasury to the Federal Reserve agents applying therefor.” 6)“Federal Reserve Act, Section 11. Powers of Board of Governors of the Federal Reserve System (d),” (Board of Governors of the Federal Reserve System, Washington), accessed on September 6, 2021, https://www.federalreserve.gov/aboutthefed/section11.htm
[author: included amendments from Digital Asset Bill, SEC 301 IN GENERAL, page 33]

So far so good. But the next section, contains the real story. According to the Digital Asset bill, Federal Reserve notes will in the future also be issued digitally:

As we saw, the Federal Reserve does not have the power to create Dollars directly. It seem like this power is now to be granted to them. Given that these new Reserve Notes are digital, this strangely merges two distinct forms of money as well.

Next, we saw that the distribution of Dollars was done through member banks. It isn’t clear if this remains the case. It clearly says that these digital Dollars can be issued “in addition” to the current Federal Reserve notes. There is nothing, at least not in this law, preventing the Federal Reserve from taking a more centralized and direct role in distributing the digital Dollar. Perhaps during the next “emergency.”

And finally, the Federal Reserve Board is to be authorized to create and distribute a “ledger-based” digital Dollar that could be used for everyday transactions. There are a few technologies one could imagine, but let us for now assume this will be a blockchain. Blockchains are great for recording transactions; it is what they do.

Perhaps that is why the Federal Reserve will be authorized to do so? However, it is a bit hard to imagine that such a centralized structure would not lead to monitoring of all transactions. And what about privacy? What about security?

The Fed is currently not as powerful as it wants the market to believe; the Federal Reserve Act restricts a lot of its actions. This amendment, however, could drastically expand the powers of the FED, by allowing them to create and distribute a “digital USD” directly. It could change the entire structure of the financial system, with far reaching consequences.

And how are digital Federal Reserve Notes to be justified in terms of the origins and authority of the Federal Reserve? If the Digital Dollar is based on a blockchain, how can they also be based on reserves?

And what mechanism will determine how funds (and how much) are added to the economy? And where and how will they be distributed? Will this all be under the control of a board of seven unelected bureaucrats? And how will they control a distributed ledger of such magnitude?

This amendment has the potential to change the way the Federal Reserve operates. It is not law yet, and can still be changed. This deserves a wider discussion by economists and financial experts outside the crypto-space as well.

The Crypto Sovereign – Structure Your Life for Freedom and Prosperity 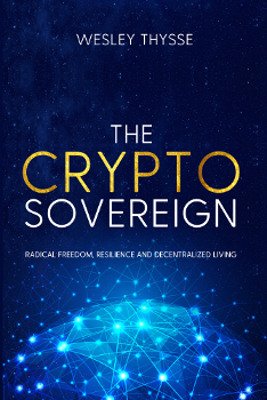 The Crypto Sovereign, a unique book on using geo-tax-arbitrage and flag-theory to optimize your taxes, protect your assets, and increase your liberty by moving across borders.